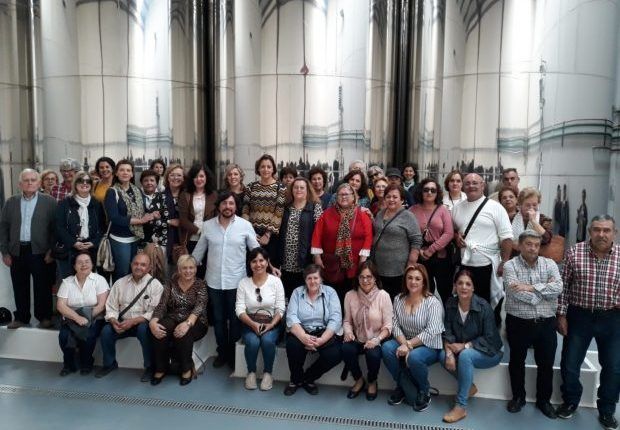 Last Monday, October 22, 2018, on the occasion of the celebration of the International Day of Rural Women, we had the honor of organizing an event at our facilities for 55 neighbors of Montoro.

We were accompanied by the Mayor of Montoro and President of the Spanish Association of Olive Municipalities (AEMO) Ana Maria Romero, Ana Diaz provincial coordinator of the Andalusian Institute of Women and Rafaela the Councillor for equality and promoter of the event.

The day began with a walk through the olive grove to make us feel like having breakfast, then we went to the central patio of the Hacienda las Monjas where we had the typical breakfast of Montoro, “Joyo” of oil, coffee and fruit. Once we had recovered our strength, we visited the modern oil mill and finished with a tasting of olive oil in the centenary mill.

Before the tasting began, Ana Maria Romero and Ana Díaz took the floor to, among other things, praise the importance of women in the rural world, arguing that, “without the role of women in our olive grove, surely this would not be what it is today. That women are not only mothers and wives, which is also true, but that they alone are as qualified as men to carry out farm work.”

Both my brother Javier and myself not only agree, but in our case, both we and our ancestors have lived in a matriarchal family, where the woman has traditionally been the head of the family.

If it were not for the History of Commitment of the women in our family and, above all, our mother, the Pago las Monjas project would not exist and, evidently, I would not be writing this blog entry.